Something was definitely wrong. In April 1998, I began experiencing recurring bouts of fever, diarrhea, and fatigue. I made repeated calls to my internist to report my symptoms. Each time, I was told I was sick again because I was a teacher and was around a lot of students with germs. New symptoms appeared…bloating in my lower abdomen with continued, worsening fatigue. My distended lower abdomen seemed odd considering I was very fit and slender.

I called my internist again and was told that the bloating was from gas or my period or my age. My internist knew of the breast and ovarian cancer on my father's side but she had previously dismissed this because it wasn't on my mother's side of the family. By the end of June, my symptoms continued and the swelling in my lower abdomen had increased. I called my internist again, on the first day of summer break. This time, I insisted on being seen.

It was a Monday when I finally saw my doctor for a physical exam. Little did I know that I was about to step into a nightmare and my life would be forever changed. A CAT scan was ordered immediately, but it was difficult to image my ovaries due to abdominal ascites. I was then given an ultrasound. I kept asking questions, but the technician was more silent than I would have liked. When the doctor came out to talk to me, it appeared as if she had tears in her eyes.

She took my hand and said, "I believe you have ovarian cancer and I will always be honest with you." Not exactly words of encouragement. I thought I was a goner. My internist then told me that she consulted with my gynecologist and they made an appointment for me to see a Gynecologic Oncologist on Wednesday. Little did I know that this was an important first step.

I was completely stunned. I was so young and strong. I went for annual checkups with both my internist and gynecologist. My periods were regular and lab work for a new life insurance policy had recently come back normal. Lucky for me, I'm locked into a cheap rate forever!

I walked out of the Medical Building like I was a zombie. I have no idea how I drove home in such a daze. My heart was aching and I was in such dread of having to tell my husband and son. We all cried and held each other. I said, "You know how much we love each other now? Well, when this is over, we'll be even closer and love each other even more." And, as it turns out, that's very true.

Tuesday was a blur of telling friends and family the news.

Wednesday arrived and I couldn't wait to meet the oncologist. I was so nervous that I just paced. I couldn't sit down. My oncologist examined me and talked to me. She exuded confidence, calm, compassion, kindness and professionalism. For the first time in two days, I had hope. When I left my internist on Monday, I felt like I had received a death sentence. My oncologist shared all of the ugly things about cancer that were necessary and her answers to my questions assured me that I was in good hands. I thanked her profusely for giving me hope. Hope is so important….It's everything! It helped spur me on emotionally to deal with this whole thing.

On Thursday I canceled the classes I was scheduled to take that summer along with a vacation to Colorado with my husband and son. Friends came over to visit and cried with me all while I was drinking that lousy, "go lightly." That name is a cruel joke. It should be named, "Go like Hell!" That night our lawyer stopped by so that I could sign a living will and health care proxy. Now that was a real thrill! I had gone through this with my father a few years earlier and it seemed like I was too young to need to do this. I was only 45.

On Friday morning, just four days after my diagnosis, I was operated on. Fortunately, the cancer had not spread to any major organs or lymph nodes, although some was found and removed from my diaphragm. It took six hours to perform a complete hysterectomy in addition to thorough abdominal exploratory surgery, requiring multiple blood transfusions. I was diagnosed with Stage IIIC, Grade 3, epithelial cell, ovarian cancer. After surgery, my CA-125 was 222. On the 7th day, still hospitalized, I had my first round of Cisplatin and went home on day 9, feeling "like I was 95 years old."

Three weekly treatments of Cisplatin followed. By the third treatment, my CA-125 dropped to 34 (35 and below is normal). I then had the whole month of August to recuperate. By this time I had lost a great deal of weight and muscle mass. Now I really looked like a cancer patient. Before I used to work out four times a week; now, I couldn't even walk around the block. Major surgery, four chemo treatments and instant menopause, all within one month, had taken its toll on me. The anti-nausea medications available today are much more effective than what I took in 1998.

August was my time to gain some of my strength back and attempt to gain some weight. At the end of August, we brought my son back to college for his senior year at Syracuse. As a mother, I desperately wanted to get him settled in his apartment like I had each previous year. It was great being able to do that normal type of activity together.

The day after we returned, I started my two-day regimen of Taxol and Cisplatin every four weeks for six cycles. Each treatment took 4 or 5 hours. I would look around the treatment room that I shared with many older women and longed to live to see my son get married and be a grandmother myself one day. I had severe nausea and vomiting, barely contained by drugs, and I used acupuncture to help cope.

After each chemo treatment, I gave myself one week in bed; and then, I began my routine. I made myself get up every morning even though I was still nauseous, shower, and turn on Fit TV. I made a conscious effort to do something physical every day. At first I could only "walk through" the 20-minute workout, but at least I did something.

I couldn't wait for my hair to grow back again. The wig was hot and uncomfortable and I am not a "hat person," so I often went bald at home. I used to refer to myself as the 'Start Trek' mom.

My last round of chemo was on January 13th, 1999, followed three weeks later with "second look" laparoscopic surgery. The results took a week to come back. That week was extremely stressful and felt like a year. When my doctor gave me the results, she immediately announced that everything was great when she entered the room. She hugged me and I burst into tears then, and every time I shared my wonderful news with family and friends that day.

A few years after my diagnosis, I went to a lecture by a doctor doing research on monoclonal antibodies at a nearby university. I went up to him after he spoke and told him my story. He told me that the current clinical trials were recruiting for women directly after completing their chemo. I pressed him further and he said there would be a phase 2 trial in about a year that I'd be eligible for, so I continued to call the researcher until I got the dates and hospitals conducting the trial. I traveled to Pittsburgh from Buffalo 6 times to get the treatment. I was willing to do anything I could to prevent a recurrence even if it was just for the placebo effect!

Cancer has changed my life. I must say that my life is better now after cancer. I have my priorities straight and I feel love and emotions on a deeper level. Complaining about the weather seems silly to me now. I am just glad to be here to see the weather! I never would have guessed that I would resign from my job (that I loved) as a high school teacher. I now pursue volunteering through SHARE'S National Ovarian Cancer Helpline and do outreach work for ovarian cancer awareness.

I am so very grateful to have lived long enough to see my son graduate from Syracuse University, marry a wonderful woman and become "Mimi" to my 2 beautiful grandchildren. I love my life: babysitting my grandchildren a couple days a week, substitute teaching, tutoring and enjoying my incredible husband. I hope to be a blessing to others as I have been so richly blessed. 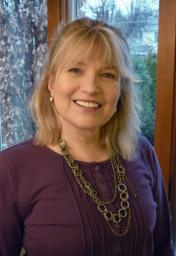