Who is a cancer survivor? A survivor is anyone living with a history of cancer – from the moment of diagnosis, the very first time you hear the word cancer, through the remainder of your life. I am now a stage III ovarian cancer survivor since April 8, 2011. One of the first questions I get asked is, "What were your symptoms?" I can tell you there are many symptoms that disguise this silent killer. Every symptom is important and should not be ignored, but this would be the most important advice that I would give to women: Tell your gynecologist that you request both trans-abdominal and trans-vaginal ultrasounds to look at the whole pelvic area.

Once the results are in, tell your doctor that you want a copy of the radiologist's report and exam description. I didn't have this copy until 4 years later when my doctor closed her practice and my medical records were given to me. I had never missed my yearly female exam. I complained to my doctor about a painful knot in my pelvic area and pain down my leg. She sent me to the hospital for an ultrasound. My gynecologist never told me the results from this test. I never questioned the results from the ultrasound after I called and talked to the nurse. When I asked her if they had the results back, she put me on hold, then she returned and said, "Oh, it's fine. Results show fibroids with nothing to be concerned over. See you for your next yearly exam."

The ultrasound was done at the hospital 10 months prior to my hysterectomy surgery. I should have had a follow-up pelvic CT scan without delay. In fact, this pelvic ultrasound done on May 6, 2010, showed a pelvic mass 9 cm in diameter. Ovarian cancer ravaged my body during the next 10 months. One night I was in so much pain that I texted my niece, Allison and told her, "I think I'm going to die." Allison texted me back and said, "NO...you will not die." During this time she convinced me to go back to my doctor. On March 7, 2011, I returned to my doctor in terrible pain with an even larger knot inside my pelvic area. This ultrasound showed the mass to be 13.4 cm in diameter.

At age 51, I was a divorced mother of two adult married sons, living single, and working. I made all the arrangements for short-term six-week medical leave from work. My plans were to recover at my mother's house and to have my son, Eric, drive my car until I was able to return to driving and return to my apartment, job, church, dog, and generally resume my lifestyle. So, on April 8, 2011, at 5 AM, I drove to pick up Eric and we went to the hospital where my sisters, Thresea and Mary, waited to join us. During this surgery, I would have a complete hysterectomy. Eric's wife, Missy, and my mother joined us there before I was taken back for the three-hour surgery. I had told my son, Alan, Jr., not take off from work; he and his wife, Julie, could come to the hospital later that evening. My cousin, Glenda, was also lined-up to come to be with me later that day. During my 6+ hour surgery, my son and family were taken into a small room where they were told by my doctor that I had cancer. My doctor told them that it did not look good for me, and that I would most likely not survive surgery.

I woke up in ICU, surrounded by my kids and family. Everyone left the room except my brother Edwin and my two sons, who stood over me while my doctor explained that I had cancer. Two other surgeons had been brought in to operate on me. The tumor was stuck to my colon and had pushed one of my kidneys closed. Eight inches of my colon was removed, a stint was placed into my kidney, and I had a bladder catheter. I was told that there were limited visiting hours on the unit, but my sister Thresea would be staying all night in the waiting room. Sometime after midnight, I woke up and began trying to make sense of what had happened to me. The nurse allowed my sister to come talk to me. As I looked at the outline of Thresea beside me, I said, "I need to ask you some questions and when it becomes overwhelming then we have to stop talking." She agreed.

After I gathered a better understanding of what happened to me, I told Thresea, "We have to pray now." I began to pray aloud. The Holy Spirit circled the room; it was a beautiful feeling. As I prayed, I praised God for saving my life, for keeping me alive. I asked Him to take away all fear and my pain, to comfort us, and to bring glory unto God's healing power. I know that we'd need to insert the words of Thresea's remembrance of that event, but I do remember hearing my voice as I prayed and I was thinking to myself, "Wow, just wow! This prayer is so beautiful! Thank you, Lord, for holding me in your massive hand!" There was another night when I asked if my son, Eric, could come to my room. He was staying all night as well. He entered my room with pure joy; it surrounded him and again, I prayed.

So many blessings...on and on! It is not even possible to mention every person here, but I was shown much love and support. I was in and out of the hospital, went through chemo, and lost my hair. I was never released to work again and was placed on disability. Everything I owned was put into two storage buildings, and I lived with family members when I wasn't in the hospital. I ended up having six more surgeries. My sister-in-luv, Mary, was my rock during my recovery. She had picked me up at the Cancer Center and we noticed some apartments nearby. I told her that if I get well enough to live alone again, I could live in those apartments to be near the hospital and cancer center.

I was able to move into those apartments in March 2012. I have been in remission since June 2014. I still have an IV power port in my chest and I go to the cancer center every six weeks. I also have scans at the hospital every six months. Most women diagnosed with Stage III ovarian cancer have a five-year survival rate of approximately 39%.* April 8, 2016 is my 5 year survival. Ovarian cancer cannot be ignored! It will not just go away!

*Survival rates are provided by the American Cancer Society. Find out how these numbers are arrived at here. 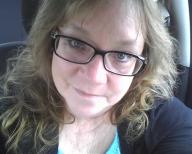