After I got over the initial shock of my diagnosis, after I recovered from my surgery, after chemotherapy was in my rearview mirror, something miraculous happened. I began getting on with my life. But I was forever changed, and in many ways, that was a good thing. For one, after my ordeal, I appreciated more, especially the little things.

But my life was separated into distinct two parts—before breast cancer and after breast cancer. I settled into a new normal. I was able to make peace with my scar, and see it as a badge of courage, as defiantly beautiful—it meant I was still alive. Maybe you will choose to mark your transition with something significant. A trip, a special purchase or perhaps a tattoo, like I did a year after my last chemo infusion. The cherry blossom branch that caresses my war wound is symbolic of my springtime diagnosis. To me, it signifies rebirth and hope.

I began attending SHARE meetings a few weeks after my mastectomy at the suggestion of Renee, a BC sister in my yoga class. Facilitators Marjorie, Agnes and the women in the ongoing group held my hand through my body rejecting the tissue expander (and emergency surgery to remove it), through my dread of chemotherapy, through my fatigue, baldness and my struggle with steroids. With their encouragement, I began to feel that maybe, just maybe, I would get through this.

When I came out at the other end of the tunnel, a strange thing happened. While I still went to SHARE meetings for a supportive "fix," my role slowly evolved. Somehow, I had transitioned and now I was a mentor for women newly diagnosed. Friends down the block and across the Atlantic in the Netherlands and the UK began asking me to talk to women who'd just received life-altering news. Sometimes it was exhausting. Sometimes it gave me flashbacks. But I was always willing to reach out to them. I felt it was my duty as a survivor.

I was honored when SHARE asked me to participate in their "Side by Side" program, where cancer survivors are matched with classrooms of medical students and teach them, through personal eperience, how to best communicate difficult diagnoses with future patients. So far, I've gone to the New York Medical College in Valhalla twice, and I think I've gained as much from it as I have hopefully given.

When SHARE was looking for volunteers to offer insight about what not to say to a cancer patient for an NBC segment, I jumped at the opportunity. This led to an interview on a Women's Radio Network program on the same topic. In both cases, I welcomed the chance to tell more people about SHARE. They've been such a big part of my healing journey and I was finally able to pay it forward.I don't mind being a breast cancer "go-to girl," even for strangers. When I noticed on Facebook that the wife of a guitarist whose work I admire was recently diagnosed, I joined "Melissa's Healing Hope," her online blog. I tried to write encouraging comments after each post. One day, there was an email from Melissa with the subject line: "When does the worry stop?" I responded as honestly as I could. I told Melissa that I don't think you ever stop worrying about recurrence but after a while, worrying takes a backseat to living.

A couple of months later, there was a telephone call from my cousin Elaine, asking third-person questions about breast cancer. I originally thought she was inquiring for a work colleague until I realized she was talking about herself. "I found a lump..." Elaine began. I listened. She asked. I answered. I was there when she couldn't sleep, IMing at midnight. I was there when she came out of recovery after her lumpectomy. I was there, texting her during chemo infusions. And I'm still there.

At this past SHARE holiday celebration, Gina, who's wrestling with chemo and lymphodema, told me, "Seeing you at meetings is such an inspiration." I was so moved I couldn't speak. After all, I was just muddling through like everyone else. Just forging ahead because what other choice do we have? But then I realized that maybe I was the light at the end of the tunnel for someone currently in treatment.

At this point my life, I'm not quite sure where I belong. It's not so easy diving back into the workforce after cutting back my workload to give myself a chance to heal. As a result, my assignments have dwindled. But post-diagnosis, I try not to stress over things like this. Nothing quite pulls the rug out from under you like the words, "You have breast cancer." Everything else is small potatoes in comparison. But maybe I have a different mission now, instead of writing about the onboarding process for Fortune 500 companies. Maybe paying it forward is a bigger mission. 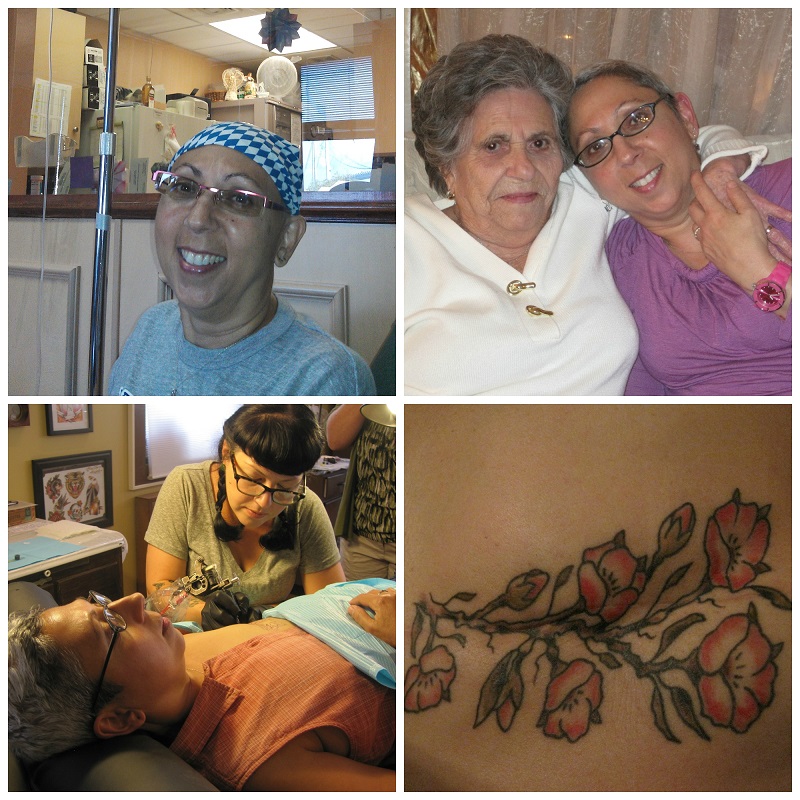 In addition to being a SHARE cheerleader, Cathy Gigante-Brown is a freelance writer of fiction, nonfiction and poetry. Her first novel, The El, is available as an ebook and as a trade paperback.