Report from the 42nd SGO Annual Meeting on Women’s Cancer

A diagnosis of cancer is daunting. Each of us finds sources of hope to sustain us through our darker moments. A major source for me is monitoring what is going on in ovarian cancer research. With support from SHARE, I attended the 2011 Society of Gynecologic Oncologists (SGO) Annual Meeting on Women's Cancer in Orlando, Florida.

What follows is a summary of some of the key points I heard at the meetings. References to specific abstracts are indicated in parentheses. A list of the abstracts pertaining to ovarian cancer can be found on Libby's H*O*P*E*'s website. Further details can be gleaned directly from the abstracts which are available on-line (be aware that this link may take a very long time to load).

Screening continues to be a hot topic with the definitive answer still illusive. A report by A. Nick et all (125) used gas chromatography/ mass spectroscopy (GC/MS) to identify signature compounds associated with ovarian cancer in breath samples. Several abstracts continued to evaluate the use of OVA1 or sonograms to assess whether a pelvic mass was malignant or benign. L. Barroilhet et al (180) reported characteristics of sonograms that were predictive of malignant masses and suggested sonograms were more cost effective than OVA1.

Economics was a theme that took a few more steps toward being part of the mainstream discussions. While the methodology for assessing the economics of a treatment is still evolving, the incremental cost-effectiveness ratio per life year saved (ICER per LYS) is likely to become a reportable outcome of clinical trials in the future.

A clinical trial of MK-4827, an oral poly(ADP)-ribose polymerase (PARP) inhibitor, showed great promise in ovarian cancer patients who were BRCA positive or BRCA unknown (8). PARP inhibitors have been shown to be an effect in ovarian cancer as single agents, not only for known BRCA mutation carriers, but also for some sporadic cancers.

The use of erythropoiesis-stimulating agents (ESAs) as a means for managing chemotherapy-induced anemia was reported to have a detrimental effect on overall survival rates (27). However, the study did not distinguish between women who had received ESAs as a preventative measure versus the treatment of a condition. In the former case, ESAs were given to elevate hemoglobin (Hb) counts to greater than 12 g/dl, where as the intended use of ESAs is for patients with Hb less than 10 g/dl. The recommendation was to restrict the use of ESAs in women who were still in a curative setting and use transfusions instead. For the recurrent setting, use ESAs with caution.

Personalized medicine has taken another step closer to becoming a reality with microRNA (miRNA or miR) and single-nucleotide polymorphisms (SNPs) taking a front row position in achieving that goal. MiRNAs are small non-coding RNA molecules that regulate the expression of genes. C. Mach et al (9) reported that 19q12.41miR locus encodes for miRNAs that sensitizes ovarian cancers to platinum-based chemotherapy. A. Sherman et al (109) showed a correlation between miR-181a and platinum-resistant ovarian cancer.

X. Stickles et al (116) identified miRNAs associated with sensitivity to topotecan, gemcitabine, and doxorubicin. A. Semaan (83) reported that the loss of miRNA 101 led to cancer progression. D. Fishman et all (124) showed a differential expression of several miRNAs correlated with resistance to cisplatin. And J. Chan et al (6) showed an association between miR-378 and responsiveness to bevacizumab.

A SNP is a single nucleotide variation in a DNA sequence. N. Fleming el al (13) identified SNPs in the XPC gene which appear to impact a cell's ability to repair platinum-induced DNA damage and hence responsiveness to platinum chemotherapies. L. Meyer et al (51) took a broader approach and evaluated SNPs associated with the mTOR pathway and their relationship to chemoresistance and clinical outcomes. J Connor and J Kolesar (179) evaluated seven SNPs in 3 genes and found that two wildtype SNPs, one in ERCC1 and the other in ABCB1, were associated with better outcomes. One can envision a day when analysis of a patient's miRNA and/or SNPs will guide treatment options and take some of the guesswork out of the equation.

As someone who tested negative for BRCA1/2, I am always interested in discussions of hereditary ovarian cancer. Two Late-Breaking Abstracts dealt with this topic. A. Berchuck (LBA-4) concluded that KRAS is not associated with a risk of sporadic or familial cancer, contrary to the conclusions of a study reported last year by E. Ratner et al (Cancer Res 2010 Aug. 15,70(16): 6509-15) and which are the basis for MiraDx's PreOvar@ test. MiraDx provided a rebuttal in Business Wire and so the debate continues. The second late-breaking abstract was presented by E. Swisher et al (LBA-4) who identified a greater percentage (22.6%) of ovarian cancers were due to inheritable germline mutations. They did so by using massive parallel sequencing assays. This next generation sequencing technique allows for a larger throughput that is also more cost effective than the methods used in current commercial genetic tests.

The Late-Breaking Abstracts will be available in the May 2011 issue of Gynecologic Oncology. Additionally, "Best of the Day" reports from the meeting are available as archived webcasts. The latter requires registration, but it is free. 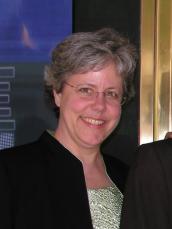 Gwen was diagnosed with Stage 3C high grade in February 2007. She was immediately struck by all the outpouring of support from her family and friends and even people she hardly new.
However, as she progressed in her journey, she met a number of women who were not as fortunate and decided she needed to pass on to others the gift of support that had been so generously given to her. That led her to volunteer on SHARE's Ovarian Cancer Helpline.
Since 2006 her activities with SHARE include not only volunteering on the hotline, but also participating in health fairs and speaking engagements, contacting state and national politicians, and distributing SHARE's literature to regional medical facilities.
In accepting the position of Regional Coordinator for the Hudson Valley, she will have access to additional resources that will help to enhance awareness about the symptoms and impacts of ovarian cancer both within the medical community and the general public. When she's not involved in ovarian cancer awareness and/or advocacy, she can be found photographing the beauty she sees in her surroundings or teaching and giving tours at Locust Grove, the Samuel Morse Historic Site.