Induction to the Hunter College Hall of Fame: Betty Reiser 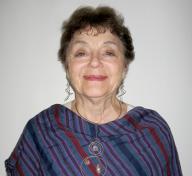 Betty Reiser, former SHARE staff and board member, will be inducted into Hunter College's Hall of Fame at 6pm on Friday, May 13th, at the Hunter College campus. She is being recognized for her contributions to the Ovarian Cancer National Alliance in Washington DC, the New York State Department of Health Ovarian Cancer Information and Education Advisory Council and her work at SHARE. Her contributions to ovarian cancer advocacy and education have been essential to improving the treatment patients receive from their doctors as well as communication between doctors and patients.

As an ovarian cancer survivor Betty used her experience to volunteer at SHARE's hotline where she helped those who called looking for information, resources and hope. During her time volunteering, she helped SHARE focus more directly on reaching the ovarian community. Recognizing the value she brought to the organization and the women struggling with this issue, we brought Betty on staff to serve as the first Director of Ovarian Programming. Betty took on the work with a passion for impacting the lives of the women we served and a commitment to finding ways to reach all women with information about ovarian health.

Betty knew that educating only women about ovarian cancer was not sufficient and encouraged SHARE to expand its thinking and include the education of our medical providers as well. She believed that seeing the faces and hearing the voices of ovarian cancer survivors could teach doctors and medical students about the disease, its symptoms and its impact on women's lives. This was an incredibly novel, powerful and courageous approach to changing the paradigm around this disease… one where the mortality rate can reach 60% because neither women nor their providers recognize possible symptoms.

"Survivors Teaching Students" was the result of the pilot program led and developed by Betty first through SHARE and later through the Ovarian Cancer National Alliance. This program educates medical students, through ovarian cancer survivors, so that they will be better prepared to diagnose and detect the disease. The program has resulted in a major shift in the way women and their providers deal with ovarian health.

The induction of Betty Reiser into the Hunter College Hall of Fame is a way of recognizing the difference one person can make when she is willing to use her own experiences to impact the lives of others. Congratulations Betty!

Most recently Betty has also been selected by the National Center for Creative Aging as a finalist to be featured in a exhibit called "Beautiful Minds: Finding Your Lifelong Potential". This exhibit features men and women ages 55 to 85, who, like Betty, have and are still making great contributions to the world without letting age become an obstacle. Watch the video here.