Tamoxifen Recommended for Extended Use

On Wednesday, a new study on Tamoxifen was published. It recommends that women who've had ER-positive breast cancer take the drug for twice as long as previously recommended. In the study, the women who took the drug for ten years instead of the standard five were less likely to have a recurrence or to die from the disease. But for some women, the drug causes major side effects.

This has been the case for Anabel Evora, a breast cancer survivor who's been on Tamoxifen for four months. Anabel is a member or our LatinaSHARE advisory committee, and we hooked her up with a WABC-TV reporter to tell her story. Watch and listen here: 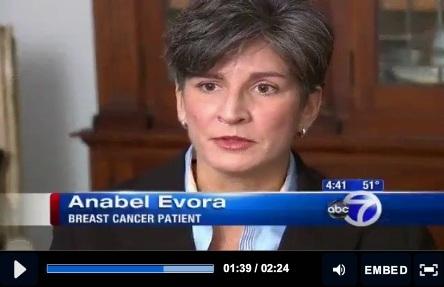 As the reporter Dr. Sapna Parikh says, deciding whether to go on Tamoxifen is not an easy choice. You should weigh your options and talk to your doctor. SHARE has a support group on December 18 where women deciding whether to take it can learn about the pros and cons and those on the drug can talk about their experiences. Interested in learning more about Tamoxifen? Check out our support group for Coping with Aromatase Inhibitors and Tamoxifen.