SHARE is very sad to announce that Linda Koteen, our former Director of Ovarian Cancer Programs, passed away on Friday, April 12. Her death is a great loss, and we will miss her tremendously.

Linda first came to SHARE in 1994 after a diagnosis of breast cancer. She started volunteering right away and became a strong breast cancer patient advocate, a support group facilitator, and a SHARE Helpline volunteer. She was soon hired as a part-time employee, supporting women facing breast or ovarian cancer.

Linda was later promoted to SHARE's Director of Ovarian programs, and she worked energetically to help propel ovarian cancer issues into a larger arena. She developed a close relationship with the Ovarian Cancer National Alliance (OCNA), served on their board, helped to plan their annual conferences, and moderated conference sessions, as well as representing SHARE at various medical conferences for ovarian cancer. Linda strongly believed that the voices of ovarian cancer patients should be heard by the doctors and researchers treating this disease, and she pushed relentlessly to make this happen.

In 2005, Linda organized a program featuring the faces and voices of ovarian cancer survivors, which was presented at the International Ovarian Cancer Conference at Memorial Sloan-Kettering Cancer Center. It brought the moderator, a well-known gynecologic oncologist, to tears and led other physicians at the conference to recognize the need to change their relationships with their patients. In 2008, she fought for and got permission to bring ovarian cancer survivors to the annual conference of the Society of Gynecologic Oncology, where they presented at a session about their experiences with ovarian cancer. This was unheard of at the time, and it made a tremendous difference in helping doctors to pay attention to the needs of their patients and not just to concentrate on treating the disease.

At the 2012 OCNA conference, Linda was presented with the Cindy Owens Big Girl Panty Award from the Ovarian Problems Discussion List of the Association of Online Cancer Resources, despite the fact that she never had ovarian cancer. Joan Sommer presented the panties to her and thanked her for "carrying the ovarian torch for us and making so much noise wherever you went."

"Linda never stopped caring about the ovarian cancer community she served so long and so well. She sat, taking notes in all-day scientific conferences; she networked with gynecologic oncologists and researchers. She worked tirelessly on behalf of SHARE and the Ovarian Cancer National Alliance. She was a fierce advocate. All of us at SHARE -- especially the Ovarian Helpline volunteers and support group facilitators she recruited and supported -- miss her moxie, her enthusiasm and her relentless effort to make things better for women facing an ovarian cancer diagnosis," said Andrea Herzberg, SHARE's Ovarian Cancer Helpline Coordinator.

Linda was a devoted wife to her husband, Steven Koteen, and a proud mother to her son Dana and her daughter Hayley. She was very happy to be able to see Hayley graduate from law school and marry last summer.

Marina Mazina, SHARE's Program Manager, spoke about how much this meant to her.

"Linda was the happiest mother, and even though she was very sick, she enjoyed being able to attend her daughter's wedding. We all saw pictures of her at the wedding in her beautiful dress looking absolutely happy walking her daughter to huppah. I knew her for many years and sat next to her in the office. We had a personal relationship as well as a professional relationship. She was witty, sharp, and funny. I will miss her."

SHARE's Senior Program Director, Ivis Sampayo, expressed what Linda meant to her and to so many.

"My friend and colleague Linda will be missed by many. We are so proud of the work that she did at SHARE. Linda always put the needs of the women she served first. With her "we-can-do-this" attitude, she was able to influence and support so many women. She always had this special way of making you feel you could accomplish anything." 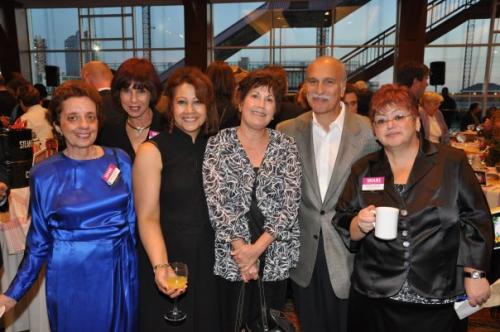 Linda with her husband Steven and SHARE staff members and volunteers at A Second Helping of Life.