Andrea: Facing Ovarian Cancer with the Chutzpah of Hope

On June 8, 2013, SHARE's Ovarian Cancer Helpline Coordinator, Andrea Herzberg, presented her story with the featured expert and survivor panelists at a free educational course offered by The Foundation for Women's Cancer's. The transcript of her speech is below.

The organizers of this panel were very thoughtful in their approach... asking us to weave into our stories the theme of hope. For me personally, this assignment was both easy and tough. Easy because I've always been a glass half full kind of gal.

And, in addition to my natural inclination to tilt toward optimism, my outcome was good.

On the other hand, being asked to shine a spotlight on hope when you are describing your very own diagnosis and treatment for late-stage ovarian cancer is... not a cakewalk. And I know I don't have to spell out for anyone here just why that is.

But here we go. Originally I thought of calling these remarks, The Audacity of Hope. But that title was already taken. So, with a nod to my mother, I'm calling my talk today "The Chutzpah of Hope."

In the summer of 1996, I noticed the shape of my stomach above the belly button had changed. It seemed like a little sink faucet was poking out. I had trouble zipping up my pants and skirts.

A doctor friend told me she thought it might be a hernia. I promptly made an appointment with my primary care physician. In less than a week, my stomach ballooned and my bowels went haywire.

The primary care knew my father had died of colon cancer at age 57 and he said... a little too scoldingly, "Remember we said you should have a colonoscopy at age 40?" Yes, we did. And I was 39.

So both of us thought it was my colon, but the internist to whom I was dispatched for the colonoscopy was a very experienced and wise physician. "I cannot give you a colonoscopy until I send you, immediately, for a transvaginal ultrasound," he said.

That threw me for a loop.

I think that internist fully expected what the radiologist saw on the sonogram. There was a whole lot of pointing and clicking going on and, in response to my questions, the radiologist broke protocol and told me right then and there what he saw. Suspicious solid masses awash in fluid consistent with malignancy.

It was devastating. I went home and broke down as I delivered this news to my husband. Our daughter was 4 and a half.

My OB GYN, who had examined me less than six months before, seemed shaken himself but sprung into action and personally arranged separate conferrals with two gynecologic oncologists.

Now here's where we got our first inkling of how important it is to embrace the Chutzpah of Hope.

Gyn Onc Number Two was quite the contrast. Don't get me wrong, he was candid about the situation. But, he exuded patience and calm. His demeanor reminded me of Yoda from Star Wars. He emphasized what was in my favor: You are young and in good shape so you can withstand a lengthy surgery. I will get everything I can see and chemo may very well destroy any cancer I cannot see.

We chose him and never regretted it. Even when... after ten rounds of chemo --- first four of Cisplatin/Taxol, next six of Carboplatin/Taxol ... he told us that while there was no cancer visible on a scan, the fact that my CA 125 had only dipped below 35 before blipping back up to 51 was probably a harbinger of small-scale residual disease.

We had arrived at a treatment crossroad and it was maddening.

It has always helped me to remember that regardless of a cancer diagnosis, I was still me and I had useful skills honed in two professions. My first jobs out of college were as a news reporter and I was used to finding people who knew stuff and asking lots of questions, taking notes and doing my best to determine what was important. At the time I was diagnosed, I had more than a decade as a uniformed officer with the NYPD. CompStat had been introduced and every police commander was perpetually preparing to answer what she or he was going to do about crime based on TIMELY INTELLIGENCE and RELENTLESS FOLLOW-UP.

So, with encouragement from our doctor, we sought a second opinion from a leading ovarian cancer specialist at the world's oldest and largest private cancer center. He was very brilliant, very kind and very candid because he knew that was what we wanted.

I have the follow-up letter he sent our beloved gyn onc. It is dated March 11th, 1997 and reading it now... 16-years later... I still zero in on two sentences: "Certainly, the prognosis is not good for someone who has failed primary therapy." And "as you well know, these patients often times do not respond well to any type of therapy."

But if you are infused with the Chutzpah of Hope, you re-read the letter and other sentences come into focus: ... "options are one, some time of salvage chemotherapy" and he listed the ones available at the time. "Another option would be to go with some type of experimental therapy. I did explain to her that we have a weekly Taxol protocol available here for which she would qualify, but I am sure there are other Phase II trials that would also be applicable...."

An Oncoscint scan kept me out of that trial, but I was treated off-study with weekly Taxol – with a few doses of Doxil for good measure. After 26 weeks of weekly Taxol -- no end in sight and a stubborn CA 125 -- the Chutzpah of Hope resurfaced and prompted me to resume research mode.

These were the days of dial-up internet. Long story short, I headed off to Philadelphia for a Photodynamic Therapy trial that combined a drug that would light up any cancer in my peritoneal cavity so that the surgeon could administer a laser and burn it away. I signed on the dotted line for another full laparotomy and woke up to hear the surgeon telling us that he did not administer the laser because he could not find any cancer. He said he was not particularly surprised.

He wasn't surprised but we were stunned.

As the science advances, we ruminate on which factors may have contributed to this outcome. I am sure some are at the molecular level and some are larger than life – our medical team, the researchers whose brains we picked, our support groups at Gilda's Club and SHARE, my law enforcement family, our relatives and friends. And, each other and our ability to laugh and take joy in our daughter and our lives even while we were in the thick of things.

Because I am lucky for oh so many reasons to be married to a particular literature professor who specializes in poetry I will conclude with the first stanza of an Emily Dickinson poem.

It appeared on my radar while I was in treatment and it has hung over my locker in every police command in which I served and is currently above my desk at SHARE, where I have the privilege of coordinating an ovarian helpline that is staffed by knowledgeable and delightful ovarian cancer survivors, many of whom are here with us today. 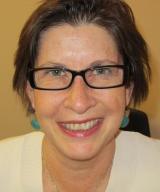