If you got to spend time with Joan Sommer, you are lucky and you know it.

Even if you found yourself on the ovarian cancer train, handing the conductor of Fate a teal ticket you obviously never wanted -- at least with Joan as a fellow passenger, you laughed, you learned and you were inspired.

"She had a wonderful sense of humor. She loved to laugh," recalls Sharon Florin, who, with Joan, cofacilitated a SHARE-affiliated ovarian cancer support group at Manhattan's Beth Israel in the mid 1990s.

Joan was one of the pioneers of SHARE's Ovarian Progam and she and her family found myriad meaningful ways to help women facing the disease during the 21 years since her own late-stage diagnosis. She passed away at her New Jersey home as the sun set on Friday, May 30th; her husband, Joe, son, Ted, daughter-in-law Ashly, expecting their first child in the fall, and daughters Kirsten, and Danica, were with her. Kirsten followed Joan's career path to nursing. Danica wants to teach kindergarten after college.

"As her partner for decades, I know she transitioned from the tangible to the intangible without a single regret," Joe wrote family and friends. She found particular pleasure in sunsets, Joe said: "She believed each closure of daylight in such a brilliant and absorbing manner was meant to be a lesson that life has so much to offer each day if we just pause and look beyond ourselves."

Diagnosed with late-stage ovarian cancer during the birth of her third child, Joan certainly looked beyond herself. A veteran of SHARE's Ovarian Cancer Helpline, she was, for many years, the go-to peer for callers with young children or women weary of treatment for recurrences. A riveting speaker, funny and honest, she also participated in Survivors Teaching Students, making medical students aware of ovarian cancer symptoms.

Every July, in promotional videos, and breakout sessions, she enthralled ovarian cancer surivors attending the Ovarian Cancer National Alliance in Washington, DC. Her perspective on living life fully despite recurrent disease was unforgettable.

"Joan would tell women she looked at her life as a tapestry, being sure to pay attention to the beautiful, vibrant picture and colors on the front -- to enjoy family, friends, vacations," recalls one conference attendee who never tired of listening to Joan: "She said she learned to pay attention to the back of the tapestry -- the knots and threads if they were unraveling. That was Joan's way of letting the women know they could elect to take breaks from treatment."

Joan's family was partial to Key West, where they reveled in stunning sunsets and swam with the dolphins.

"Joan's love of life and her ability to laugh no matter what was going on, gave us all inspiration no matter what adversity we faced," says Diane Paul, another late-stage ovarian cancer survivor who was in Joan's original support group at SHARE: "She was Joan and living was what she was all about."

You may have heard her speak. You surely heard her laugh. But you never heard Joan complain. She always wanted to know how you were doing.

"Hope is falling asleep and expecting to wake up each day in spite of what you have heard," Joan once wrote for a hospital publication about living with ovarian cancer: "It is thinking about the possibilities, not the probabilities. It is preparing to die, but expecting to live. When faced with uncertainty, there is nothing wrong with hope." 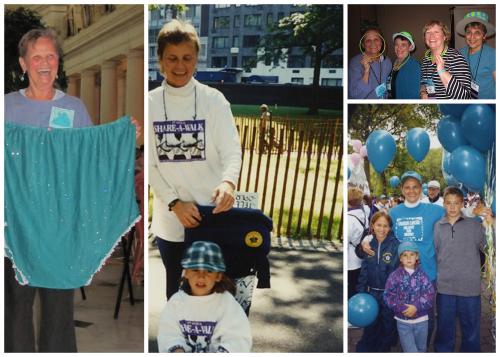 Joan celebrating: with Danica at SHARE-A-Walk (center), with SHARE ovarian cancer advocates at the OCNA conference (top right), and with all of her children at SHARE-A-Walk (bottom right). An active correspondent of an online ovarian cancer support group, Joan was a recipient of The Big Girl Panties (far left), awarded to women who, facing adversity in the course of their treatment, do the research to understand their options and make informed decisions.