We were so sorry to learn about the passing on January 10, 2015, of Carmen Diaz, who fought ovarian cancer for 11 years. In 2003, Carmen was having major abdominal symptoms, so she visited her primary care physician, a gastroenterologist, and her gynecologist. None of them thought to test her for ovarian cancer. She ended up having a tummy tuck to relieve her bloating, and when her abdomen began to bulge following surgery, she was finally given a CA-125 blood test and diagnosed with Stage IIIC ovarian cancer. Her story is a prime example of what happens when doctors and patients don't have basic information about ovarian cancer symptoms.

When Carmen came to SHARE in the mid-2000s, she wanted to help other women facing ovarian cancer not to feel alone. In her professional life, she had worked for many years as an administrator at NYU Law School. By the time she came to SHARE, she had retired from her position and for a short time worked as SHARE's ovarian cancer helpline coordinator. She then became a peer on SHARE's helpline, supporting Spanish-speaking women affected by ovarian cancer.

Carmen said she used to be a shy woman who didn't like public speaking, but ovarian cancer changed all that. She became a strong advocate for ovarian cancer awareness, telling her story to doctors and medical students through OCNA's Survivors Teaching Students program. She gave presentations about her experience with ovarian cancer to support groups and went to Capitol Hill to advocate for federal funding. She joined four other survivors at a presentation before the Society for Gynecologic Oncology, the first time that patients had ever presented at this conference.

Carmen fought ovarian cancer for many years, and through all of the treatments she endured, she seemed to continue to enjoy life tremendously. And she continued to help women affected by ovarian cancer through SHARE's helpline.

"She never said 'no,'" said Andrea Herzberg, SHARE's Ovarian Cancer Helpline Coordinator. "Even when she wasn't feeling well, she would never turn down a request to talk to a woman with ovarian cancer."

"Over many years, she used her bilingual experience to help so many women," said SHARE's Senior Director of Programs Ivis Sampayo. "Because of Carmen's story [posted online here] SHARE reached people all over the country and around the world, including places like Honduras, Guatemala, and Mexico."

Carmen was the mother of two children, a grandmother, and an active person who loved her life. In addition to her home in New York, she loved having a home in Florida. She also really enjoyed getting dressed to the nines and going dancing. We will miss her. 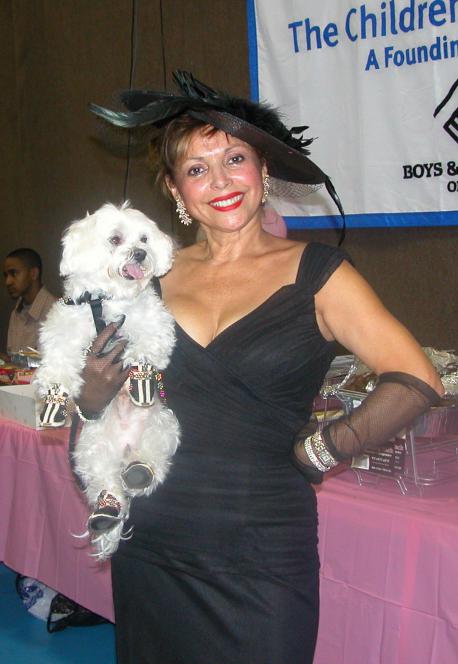 Carmen with her dog at LatinaSHARE's Celebration of Life event in 2008.