Ovarian cancer survivors instrumental in the development of SHARE's Ovarian Program gathered this holiday season in honor of their comrade, Joan Sommer. For more than two decades after her own late-stage diagnosis, Joan was a tireless advocate, a warm, witty and knowledgeable woman who inspired others by example.

In memory and celebration of Joan, artist Sharon Florin, who, under the tutelage of veteran quilter and ovarian cancer survivor/advocate Diane Paul added quilting to her creative endeavors, created a quilt incorporating T-shirts from every SHARE-A-Walk fundraiser.

Joan, her husband, Joe, and their three children, Ted, Kirsten and Danica, were a sparkling presence at these walks.

Kirsten, who became a nurse, following in her mother's professional footsteps, was on hand to share laughs, memories and pictures of Theodore Ziggy Sommer, Joan's grandson, born in September.

This brings back memories of another quilt made by ovarian cancer survivors:

In 1997, then SHARE Board Member Bess Myerson (whose death was recently announced) introduced a quilt made by ovarian cancer survivors at the Beth Israel Medical Center. The display of the quilt was co-sponsored by SHARE. Bess was also instrumental in the development of SHARE's Ovarian Cancer program, donating a significant sum to SHARE in the mid-1990s. In Bess's honor, SHARE is establishing the Bess Myerson Ovarian Cancer Support Fund. 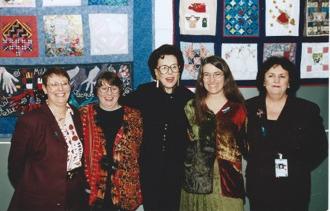