Here's a delicious holiday treat, brought to you by Cook for Your Life! 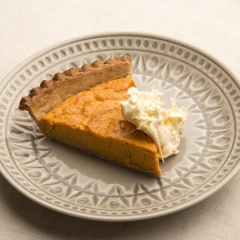 This is one low-fat holiday treat that won't disappoint. Rather than adding a ton of sugar, the key to this deliciously spiced pie is to bake the sweet potatoes first to bring out their natural sweetness. And instead of oil or butter, we've used yogurt to give the pie its velvety smooth texture. It is very good. If you are gluten-free, bake the filling on its own without the crust. It will be just as delicious. Omit the orange zest if you don't want an orangey flavor.
Meal: Dessert, Healthy Holidays
Serves: Makes 1 9-inch Pie
Prep: 30 - 45 min
Main Ingredient: Sweet Potatoes

1. Preheat the oven to 350 degrees. Pierce the sweet potatoes a few times with a fork, then place on a baking sheet. Bake in the oven until tender when poked with knife.

3. In a small bowl, lightly whisk the egg yolks until fluffy, then add in the sugar and beat until light yellow and creamy, about 1 minute. Stir into the potato mixture along with the yogurt until evenly combined.

4. In a separate bowl, using an electric hand mixer, whisk the egg whites until soft peaks are formed. Using a wooden spoon or spatula, fold 1 tablespoon of the egg whites into the sweet potato mixture to break it up, then gently fold in the rest in 3 batches. Don't overmix - a few white streaks should remain. Pour into buttered baking pan or into a pie crust.

6. Let cool completely, then serve at room temperature or cold from the fridge.