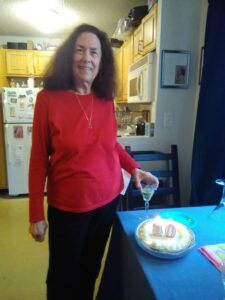 In 2006 just before I turned 65 years old, (in the few years before had operations: two basel cancers on face and one melanoma cancer on leg), I was diagnosed with breast cancer in my left breast. "Invasive mammary carcinoma with lobular features, PET scan shows a hypermetabolic left axillary lymph node," from report. I was devastated as no one else in my entire family (cousins) had breast cancer.

A surgeon was recommended by the hospital who turned out to be wonderful. After the successful operation (cancer and one lymph node removed). I was recommended to an Oncologist who suggested radiation and chemotherapy (to be on the safe side he said!). I said okay to radiation and no to chemotherapy as decided to take my chances after hearing stories about chemotherapy problems. It's really all about personal choice. He also said since I am still producing estrogen, and need to stop, as mine was an estrogen positive cancer, suggested an anastrozole tablet, Arimidex.

I then proceeded to the radiation center at the hospital. Before radiation they need to make a form to cover all but the area to be radiated. It took over 1-1/2 hours with me lying on a table facedown, my left breast hanging. There were all these technicians touching my breast trying to get into my breast in position so that I finally told them only one person would do the placement, or I would be leaving.

I returned in two days to try out the form and it again took over an hour and they still could not get the correct position. Finally, they worked it out and fixed the body mold. Then started radiation, 180 renkins. The radiation leaves you sore and tender. They gave me some lotion to apply.

Each session it took so much time to get me placed, but finally by Thursday, it only took 10 minutes to place me. Also, during the radiation period, I experienced terrific mood swings: rage, anger, and grief. I developed a bad rash from the radiation. Each day after a session, I would walk about seven blocks to try to get rid of my anger by going to my favorite coffee shop and treat myself to a sweet and coffee.

My doctor gave me Cutivate Cream for the rash, but another patient told me about using the aloe vera plant which I started to do, and which helped, much better than the hospital lotion. But my rash from the radiation was very bad and spreading. Doctor suggested a rest from full radiation treatment and instead to start seven Boost shots the next day. So was fitted in another room for Boost machine. Boost shots went faster but I became extremely tired. However, rash responded to less radiation and the Cutivate Cream.

Then went back to full radiation and by the end my breast was so burnt especially side and near armpit. Even with the aloe vera plant. Friends suggested Bach Flower Rescue Cream which helped tremendously.

During my entire radiation experience, my oncologist never once called to see how I was doing. Once I finished radiation treatment and went to see him, I confronted him and told him how angry and disappointed I was by his lack of care. I decided to ditch him and found a much better oncologist.

I asked the hospital for a cancer social worker to help manage my anger, but the hospital at that time (2007) did not have anyone, which only fueled my anger as I really needed help. Then proceeded to sign up with SHARE and Gilda's Club (Gilda's Club had in the children's room a boxing bag and tiny gloves which fit over my fingers, and I would pound away at the bag). Both were life savers with their help and support.