To celebrate the 25th anniversary of LatinaSHARE, we are telling stories of women who have turned to LatinaSHARE over the years and helped make LatinaSHARE into the thriving and critically important program it is today. 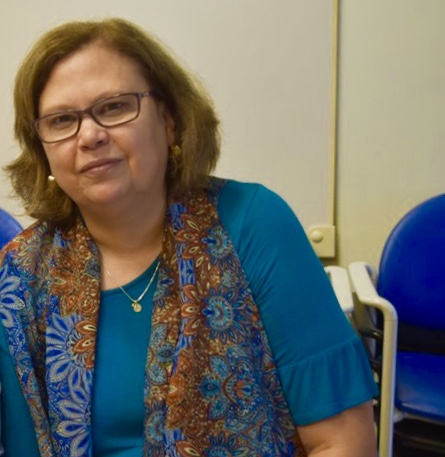 Having been diagnosed at 39 years old, I was bewildered, angry and scared. After receiving a botched biopsy at the hands of a general surgeon, I decided to seek a second opinion at Memorial Sloan Kettering Cancer Center (MSKCC) after a suggestion from my supervisor. I knew I was in good hands as soon as I met the breast surgeon. Needless to say, my consultation appointment was on a Thursday and I had my surgery the following Tuesday. Thank God, I worked for a pharmaceutical company at the time, very close to the hospital, where I had access to people and the internet for resources. I knew how to look!

How did you get involved with LatinaSHARE? How did your involvement change over time?

I was a participant in a support group at MSKCC and saw the SHARE calendar in their resource library, but I didn’t get involved with LatinaSHARE from the onset. I attended a SHARE young women’s group first.

A year later, after finishing my chemotherapy and radiation treatments, I heard that SHARE was planning to send a group of women to Washington for the National Breast Cancer Coalition (NBCC) conference, so I went with one of the women from the young women’s group and that’s when I met Ivis Febus Sampayo and Alex Colon. At the time, Ivis was the LatinaSHARE Program Director and needed an associate for the program, so I applied and got the job. Initially, I was with SHARE from 1998 to 2006; then I moved to Arizona, but I returned a year later. Upon my return to the east coast, I decided to go to graduate school for an MPH degree.

In 2013, Ivis contacted me about a survivors and caregivers project with LatinaSHARE and Georgetown University, and that's how I returned to SHARE and took on my new responsibilities as a Research Coordinator. Since 2013, my role has changed a few times but It has always been my honor to work with SHARE and the LatinaSHARE program.

Why is LatinaSHARE so important?

Latina survivors need to understand what cancer is and how it relates to their diagnosis in their own language. Understanding cancer in itself can be confusing for people, but if you do not speak English it can be almost impossible. For those of us working in the program, we are seeing more and more Latinx cancer survivors, which makes this program a Godsend. To this day, there is still a scarcity of organizations helping Spanish-speaking survivors to the level that LatinaSHARE has. I can’t believe how this program has grown from when it began 25 years ago.

What is your hope for LatinaSHARE on its 25th Anniversary?

That LatinaSHARE continues to grow and flourish in order to help those who need our services.