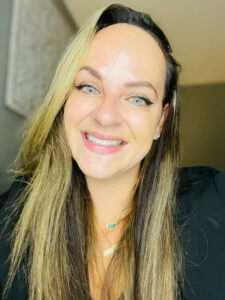 A few days after I celebrated my 32nd birthday, I decided it was time to look into some symptoms that were bothering me. I've always been really in tune with my body, so after I experienced some irregular bleeding in addition to consistent back pain, I knew it was time to be seen.

I went to my local health department, where I received my physicals, as I wasn't in the best financial situation. They indicated that my cervix was "angry," and that I likely had some sort of infection. Without any tests, I was sent on my way with antibiotics.

This didn't sit well with me, and I felt like there was something more, so I made another appointment. This doctor indicated that there may be a mass, and suggested I get it checked out. Due to my lack of insurance, it was nearly impossible to find someone to give me a biopsy within a reasonable timeframe. Just the mere thought that this could be cancer led me to call around to find someone to see me. I finally found a doctor willing to see me, and they determined that I had stage 2b cervical cancer.

You always hear the word "cancer,” but you never think it's really going to happen to you. Nonetheless, I hopped right onto making the applicable appointments to get this cancer out of my body as quickly as I could, involving minimal impact to my job, and most importantly, my 3 children whom I raise alone.

I was told that I couldn't work for the next 3 months, and had to have radiation daily, and chemo weekly. All of this followed by 5 treatments of brachytherapy. I was more devastated at the treatment plan than the actual diagnosis. I didn't have the resources to take care of my kids without working, and I didn't know how I was going to get them everywhere they needed to go, or care for them if I was feeling too ill from the side effects.

I did what I had to do and made it work. I completed 3 months of treatment, and unfortunately lost my job in the process, due to the fact that it was a small company who just couldn't keep me on. My doctor said everything went well, and was confident that my prognosis was great, and I could carry on with "regular life" as I was in remission.

Then 3 months later, I went in on November 9th, 2016 to receive my follow up PET scan. At that point, I didn't have any "scanxiety" as my doctor really minimized my diagnosis the entire time and I fed off of his confidence. Here, I was informed that my cancer had metastasized to my lungs and liver. I didn't even know what metastasized meant at the time. He explained that once cancer leaves the initial site, it becomes next to impossible to control, and that I would die of this in as little as 3 months, and not to exceed 2 years.

It was as if my heart was physically ripped out of my chest. All I could think about were my 3 children. I was more scared of leaving them than cancer. I was also livid at the fact that they didn't catch this. I was getting scanned weekly for brachytherapy...how did they not catch this?

I was only being scanned from the waist down.

As devastating as this moment was for me, I knew that this wasn't my fate. I knew that there were no viable options within my family or anyone to care for my children. I knew that I didn't want to leave the 3 most important people in the world to me. So I fought. Hard. I found a different doctor who believed in me. I became 100% determined to rid myself of this cancer. I changed my diet, adjusted my mindset, controlled my surroundings, started a great job, all while undergoing 6 rounds of combination chemotherapy. No matter how awful I felt physically or emotionally, I pushed through for my babies. I like to say, "I faked it ‘til I made it.”

Then came the follow up to this set of treatments. I was more nervous than I had been in my entire life. Finding news that is literally life or death, is a level of anxiety I can't even describe.

My doctor said I had an unbelievable response, and I had to get one more scan to see if radiation was necessary. Turns out, all that was left was calcified tissue, and my cancer was GONE. This was August 10, 2017. I will be celebrating 5 years in remission next year, when I was told I barely had months.

It's taken time to really accept the fact that I'm in remission. For a long time, I felt like the grim reaper was following me around to let me know my time was up. Scan days are still hard, but at the end of the day, I have life, and I am able to be here to watch my kids grow up - so it's a million percent worth it.

I'm grateful to be in this position at SHARE, and help others affected by a cervical cancer diagnosis. I hope that my experiences encourage others to advocate for themselves, listen to their body, and help connect people to the resources they desperately need.