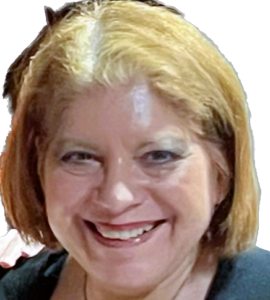 My name is Ann Reisig.

Religiously I go for my annual mammography's and sonograms. I had my annual on November 26th, 2021. I was on top of the world when I started a new hybrid job on December 13th, 2021.

Then I get a call from my doctor telling me that I have to go in for further imaging because they saw something suspicious. Not thinking too much about it I made a follow-up appointment on December 23rd. I was in the height of my job at the time and snuck out thinking that the appointment was going to be quick, unfortunately -- or perhaps fortunately they had to take several images to confirm there was a tiny spot in my duct. The radiation doctor said that it looked like it could be calcification because my breasts are dense. It is not always easy to see things clearly. She made an appointment for me to have a stereotactic biopsy.

I tried very hard not to let this spoil my holiday.

My biopsy was scheduled for January 12th, 2022.  Before the biopsy, I was scheduled for a sonogram so that they could pinpoint the location. After doing the sonogram twice, they wanted to do a core biopsy before the stereotactic biopsy. I had no time for this, I had to work. But reluctantly I did what was needed.

A few days later my doctor called to tell me that I had invasive ductal carcinoma (IDC). I thought that I was having a nightmare, there was no way that this could happen to me. My entire life was crumbling around me, I cried so much during that time I just wanted to give up and collapse into a corner. Luckily, my friends and family would not allow me to do that, they would make me put on my "big girl pants" and fight.

I found a great breast surgeon who confirmed that my original diagnosis of IDC was in fact triple-negative (TNBC). It was like my nightmare was getting worse. One of my fears was it possibly spread to other parts of my body, but, luckily it did not spread.

My doctor suggested I get a lumpectomy with sentinel lymph node biopsy dissection along with four other for lymph nodes to make sure the cancer hadn’t spread there. The surgery was successful. The cancer was completely removed and did not spread to my lymph nodes.

Through my stage at 1A, my surgeon and oncologist recommended that I have chemo as well as radiation as a precaution.

I was terrified of the chemo and the side effects. Upon the suggestion of my oncologist, I invested in the Dignicap Cold Cap treatment, so I was able to keep the hair on top of my head and hide from the rest of the world that I had cancer.

I started my first of 4 chemo treatments on May 20th at New York Cancer and Blood. The facility was beautiful and the team that worked with me was great.

My youngest brother and sister-in-law were my rock during this time. My sister-in-law became my sister, she accompanied me to all of my appointments and treatments. I am not really sure if I could have gone through this without her.

I refused to let this get me down and was determined to maintain my life as though nothing was happening. I continued to work and work out during my chemo sessions.

My treatments were on Fridays, every three weeks. The first couple of days after, the aluminum taste in my mouth was horrible, although not debilitating. I also felt pretty crappy for the first couple days after treatment, but by the end of the week I was fine. I found that acupuncture helped with the nausea.

What got me through my time was a countdown system. 1 down 3 to go--etc. I also found that talking to other breast cancer survivors and seeing how well they were doing really helped.

In August, I started radiation, which was every day for 10 minutes for 21 sessions.

I finished radiation on September 19th and it was an even more glorious day!

On October 12th, I had a follow-up visit with my oncologist. She said my blood work was better than perfect and to go out and live.

I have mammography and sonogram tomorrow. I am confident that I will be fine.

Good luck to everyone going through this. My advice is to stay strong and stay positive. It is okay to fall down once in a while, but don't stay down for too long. Get up and "Put your Big Girl Panties on". Keep moving forward, you will see the light.