To Be Seen | Michele Wheeler

Michele, blogger at A Crack in the Wall, discusses the struggle of being seen and understood by her care team in her story below. You can read more of her work on her website at acrackinthewall.com. 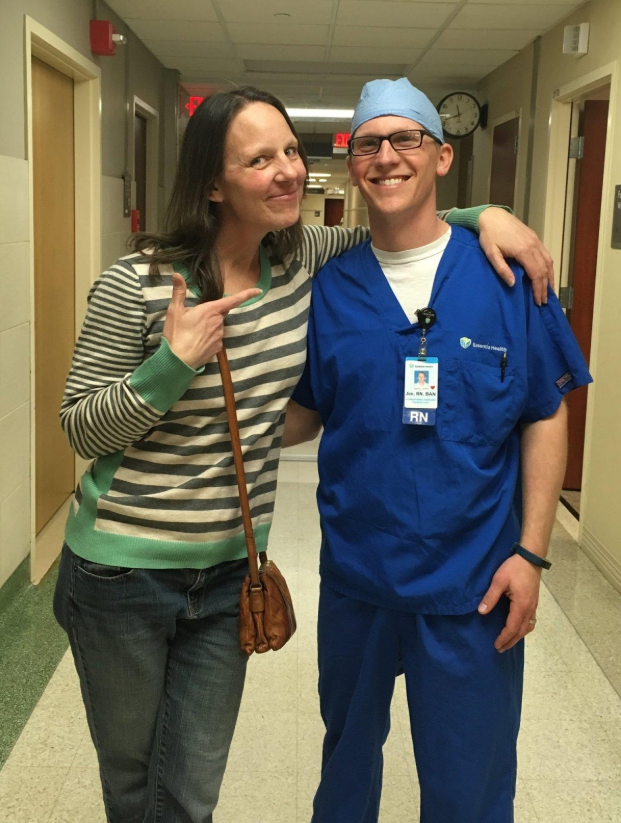 The birthday party was going to be phenomenal. He stood over me explaining how his wife had to bake three cakes - three! - because they invited the kids in both classes. I lay trapped in tubes and wires and blankets and gowns while his words passed through the air above me; he wasn’t really talking to me anyway. Some people might think they were going overboard for a four-year-old. Other people might. Not anyone in this room of course. Radiologists rule in this room. I stared at the ceiling thinking What in the ---- is happening here? as the masked techs oohed and awed over those cakes and the balloons and the bouncy house. Trapped, I tried to ignore them all as he shoved the needle into my liver to grab the sample that would confirm if I was dying of cancer or not.

That was three years ago. The sample came back hot. Now, I was back in the exact same hospital, the exact same radiology department, for another biopsy. This time, we were looking for mutations that could provide more treatment options. I insisted on a different surgeon, and I got one, but the stench of frosting and the memory of that big fat needle were still very much with me. They told me, back then, that the meds would give me an I-don’t-care feeling, with a little amnesia mixed in. But I remembered. Oh, believe me, I did care.

And so I told them, now, how the baggage from the last liver jab was increasing my anxiety beyond the more “standard” biopsy stress. I’m just barely hanging on here folks, I told them. Please help me out by upping those I-don’t-care meds and skipping the talk about your outstanding personal plans, thanks so much.

Sounds fair, they said. That’s exactly what we’ll do.

I didn’t use to lay it out that way. I let uncertainty and fear overwhelm me into passive obedience. Because certainly all those nurses and doctors had been through whichever procedure far more times than I have. But after years of cancering, and too many appointments left feeling undervalued, I’ve matured into the realization that I am, in fact, an expert in Me. More so, I’ve come to appreciate how much doctors and techs really do want to get it right and telling them how I want it just makes it easier for everyone.

Does it actually need to be said that you shouldn’t talk about your kid’s happy party during a terminal illness reveal? And honest feedback, the part of me that gets angry every time I see a birthday cake, would readily join you in hanging up that first surgeon.

But the part of me that needs to let go of that anger remembers that not everyone has experienced the sharp side of the needle. And so yes, it does need to be said.

My med guy, Jim, came in then to introduce himself. He managed to strike up small talk that seemed well placed, asking me about my kids a bit, surface questions, with just enough about his own kids to keep the conversation going. He was gentle. He let me know that I’d get my I-don’t-care meds after just a little more prep.

He wheeled me into the biopsy room, and that prep got very active. There were at least another five of those techs with their masks hooking me up to wires and hoses. The radiologist came up then and reached across me to adjust the monitor he would use to look for a sampleable tumor with ultrasound. When he started pushing down with the wand on my stomach, just below my ribs, I told him, “Can you move that screen so I can’t see it, please?” As he did, I closed my eyes and said, “And no comments about the size of the tumors either, please.”

I could still feel constant motion around me, and then a quiet voice from just behind me, Jim, “Michele, I’m going to give you some of that anti-nausea medication now, okay?” I nodded, thinking but what about the I-don’t-care meds? Not wanting to sound like a junkie, I tried to be patient.

But I could feel it coming. Like the vibration on train tracks before any sound of the engine, before any hint of smoke coming from its stacks. I kept my eyes closed and wondered which would arrive first: the panic attack or the I-don’t-care meds.

Panic did. And I fought with it to speak, managing only, “I could. Now. The I don’t. Don’t care. Meds. I need them cuz I think I might run. I’m gonna…” I raised my hand just a bit to the radiologist, “So with the wand. It. The. Could you. Wait. Please?” He took it off my stomach and the room got very still. I kept my eyes closed to find the words, and finally managed, in a whisper, “I’m going to have a panic attack. I’m just about to and I need that anxiety medicine right now.”

With that, the radiologist patted my arm gently once, and let me know he’d wait outside until the meds kicked in. The rest of the staff left as well. But Jim stayed. He interrupted the quiet only to give me brief updates. I’m delivering those meds now, Michele. And then a few moments later, They should start working really soon.

It was more like I started leaking than crying. The tears just slipped easily from the corners of my eyes. With all the tubes and wires and blankets and gown twisted around me, I was helpless to do anything but let them fall. But I said nothing, because I thought asking for tear wiping was taking it a bit too far.

I didn’t have to ask. Before those tears reached my ears, I felt a tissue on either side of my face as Jim gently wiped them up. And yes, the tenderness of that did make me squeak out a few more tears. But it was far fewer than it would have been, had those tears fallen unnoticed and been left to soak my hair.

Thank you, I said.

You’re welcome, said Jim. And for the next few minutes, I lied there, leaking tears, and Jim sat behind me, wiping them up.

The meds finally kicked in, enough so that we could carry on with the procedure, but they didn’t erase the reality that put me there. I leaked, intermittently through the whole thing. One click. Two clicks. Tears slipped from my eyes as little bits of cancer and liver were pulled from under my ribs. I kept dripping while I counted three… four... five. I think it was Jim that kept wiping the sides of my face as I silently cried. I don’t know. I kept my eyes closed the whole time. But I do know that not one tear passed an ear, and that was an enormous comfort.

Because still wrapped in blankets and trapped in illness, I felt seen.

So Jim, buddy, thank you.