This September, join ovarian cancer advocates across the country for Ovarian Cancer Awareness Month through the #IWishIKnew campaign.

In honor of Ovarian Cancer Awareness Month this September, SHARE, along with FORCE, T.E.A.L, and the Foundation for Women’s Cancer, are highlighting the voices of ovarian cancer survivors and patients speaking out on what they wish the public knew about ovarian cancer.

According to the American Cancer Society, over 20,000 new ovarian cancer cases will be reported this year, and almost 14,000 of those women will die from the disease. The #IWishIKnew campaign strives to educate women and the general public about the symptoms, statistics, facts, and myths in hopes that it will help decrease the number of higher-stage cancer diagnoses, along with the number of deaths each year, due to ovarian cancer. Survivors, patients, advocates, friends, family, and more are encouraged to post on social media using the hashtag #IWishIKnew all throughout September to share important information with the public.

"Never hold back a single symptom from your doctor for fear of being a complainer. It may be the single symptom that leads her or him to make a correct, timely diagnosis." 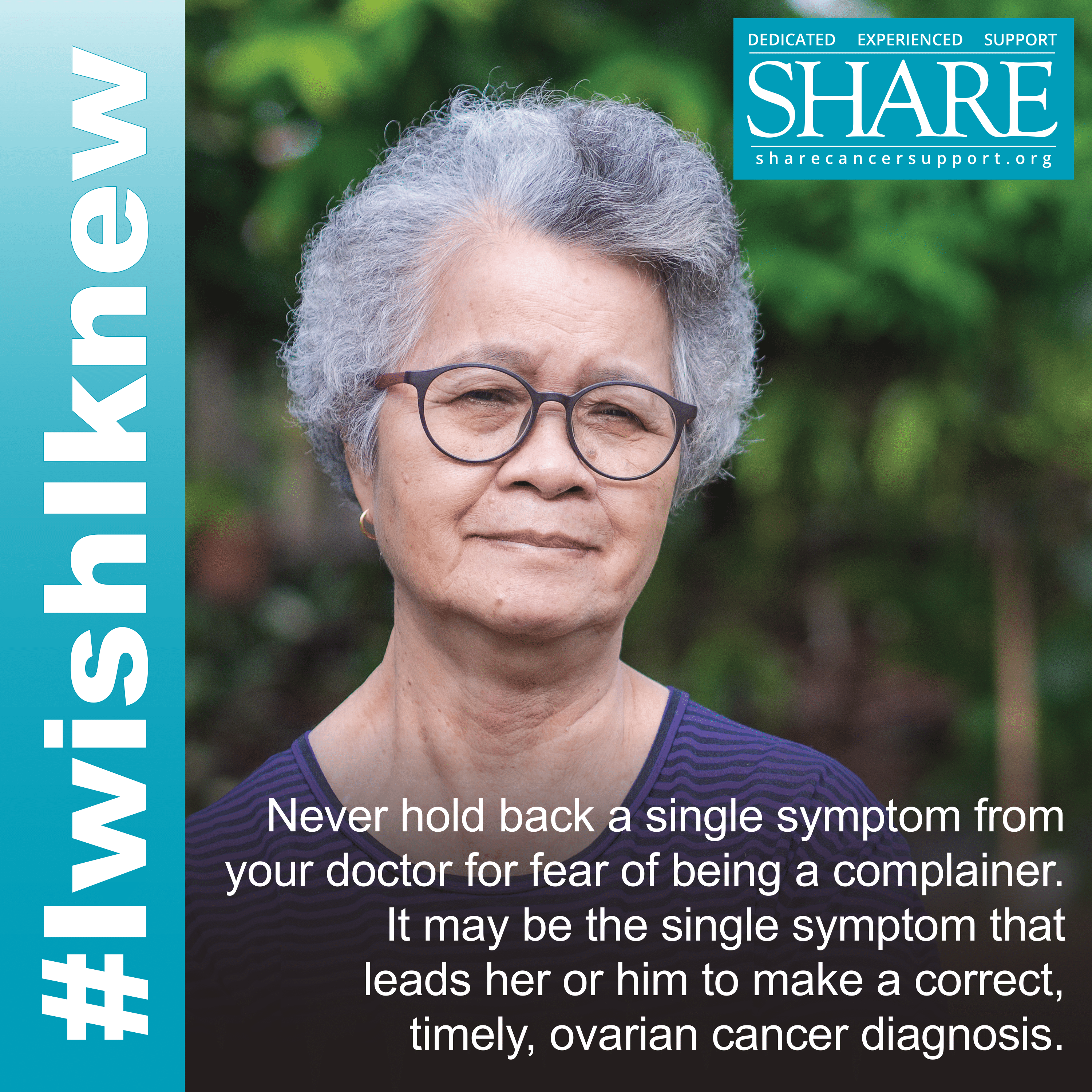 Early symptoms of ovarian cancer are often overlooked, as they can be synonymous with common occurrences, like a woman's menstrual cycle. These are generally known as symptoms that are much more likely to occur in women with ovarian cancer compared to the general population:

If you experience any of these symptoms over longer periods of time, talk to your doctor about your likelihood of developing ovarian cancer.

"Ovarian cancer is not totally silent. It whispers and needs to be heard. Don't ignore any symptom, no matter how vague. Listen to your body." 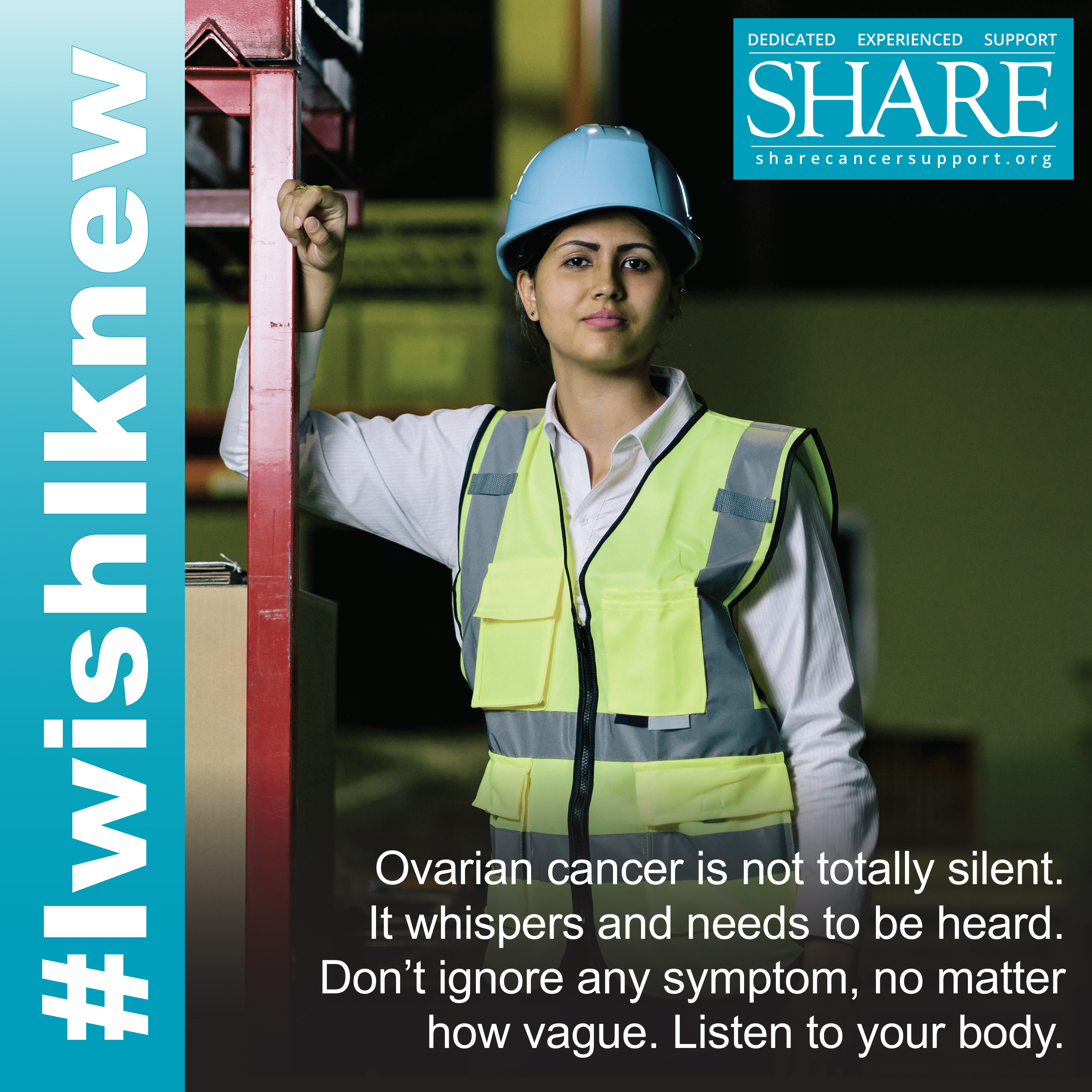 There are a lot of common misconceptions surrounding ovarian cancer that mislead the public, one of which is that a pap smear test can diagnose ovarian cancer. Currently, there is no reliable screening to detect ovarian cancer.

"Women who carry either the BRCA1 or the BRCA2 gene mutation have a greater chance of being diagnosed with ovarian cancer."

It’s a common misconception that having the BRCA1 or BRCA2 genetic mutation only increases your risk for developing breast cancer. These mutations can also increase your risk of being diagnosed with ovarian cancer.

SHARE is also honoring 25 years of ovarian cancer programming and education. To celebrate, we’ll be offering a number of educational programs during Ovarian Cancer Awareness Month, which are all accessible online. Make sure to join us for some of these informative programs for even more opportunities to learn about ovarian cancer, or share them with a loved one today:

Let's get the party started with some Zumba! Bring all of your moves to this fun class with other ovarian cancer peers and help kick off the 25th anniversary celebration.

Come celebrate with us! Join us for some fun virtual games and connect with new and old friends to commemorate the 25th anniversary of the SHARE Ovarian Cancer Program.

Please note: it is the same Zoom link for both Zoomba! and the Survivor Celebration.

Is there sex after cancer? YES! Join Dr. Don Dizon, Professor of Medicine at Brown University and oncologist specializing in cancers in women for an open discussion about intimacy and sexuality.

SHARE is looking for a few brave gyn cancer survivors to join the discussion.

All of our support groups are available via Zoom, or by telephone.